The 2 apartments of our Guesthouse Nofylou in Antananarivo, were completely renovated at the beginning of the year 2019. To access it, you will have to cross a gate and go down a dozen steps, located between the building and the one sheltering the hotel. Niaouly. At the landing, another door will allow you to access the hall of the building that serves the 2 apartments.

The apartments are fully furnished. 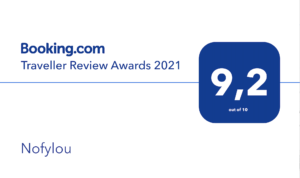 The Guesthouse Nofylou imposes to all its occupants the respect of the following rules, and this, according to the rules in force in Madagascar and for the well-being of all the occupants:

We do not accept bookings of less than 3 nights. Thanks for your understanding.

The number of persons occupying the apartments can not exceed 2 beds.

The apartments of the Guesthouse have been designed only to accommodate single people or couples. In no case do we accept families.

Tenants agree to provide us with the details of their information and to fill out a police form.

You have the possibility of receiving during the day collaborators, suppliers, confreres, …. And this until 20H.Passed 20H, visitors are kindly asked to leave the enclosure, and this for the well-being of other occupants of the residence.

All people residing or going to Madagascar must be aware of the effective implementation of the law 2007-038 of 14/01/2008 which stipulates, inter alia, that

Charges have already been pronounced in Nosy Be, Antananarivo, and many other cities in Madagascar, based on this law.

The tenants, and especially the person who made the booking, are fully liable criminally and civilly for damage / theft that may have occurred in the apartment, and the common parts.

We reserve the right to sue the occupants in Madagascar and abroad and to ask for an exit ban according to the seriousness of the damage.

We reserve the right to put an end to any reservation not respecting the provisions of this regulation, and to denounce to competent authorities all non-compliance with the legislation concerning « sex tourism »